• You are here » Home » Blackjack Switch 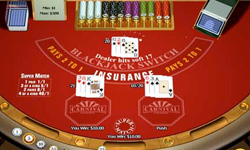 Blackjack Switch was invented in 2009, and it is one of the lowest house edge Blackjack variants.

Blackjack has always been one of the most popular card games in the world. The game was first played back in the 17th century and since then it has become an inseparable part of every land based and online casino. This interesting game is played with one or more decks of 52 cards and the mission of the player is to beat the dealer’s hand. Just like every other popular game, blackjack has many unique variants which feature rule modifications that make every single game session special and interesting in its own way.

In 2009, Geoff Hall patented one of the most commonly played blackjack variants known as Blackjack Switch. This game is usually played with six or eight decks and it has one rule which makes it unique and, at the same time, favourable towards the players: players get two hands, instead of one, and they can switch the top cards of their hands if they wish to do so.

How to Play Blackjack Switch

Blackjack Switch is very similar to the classic blackjack game. Nevertheless, when playing this variant the player receives two hands which are separately played. After the player sees the first two cards of both his hands, the player can choose to switch the top cards; hence the name of the game. For example, if the player has Ace-4 and 7-10, he can switch the cards and end up with Ace-10 and 7-4.

Once the player switched the cards or decided not to change anything, he can continue to separately play the hands by choosing to hit, double or stand. The point of the game is to score more points than the dealer and, at the best possible scenario, score a Blackjack.

Besides the real money playing mode, there are many online casinos that offer free Blackjack Switch game sessions. These demo or practice mode blackjack variants are played with points that have no real worth.

Depending on the casino, the bet limits can vary; however, usually the minimum bet is from $0.5 to $1 and the maximum bet is $50-100. The game rules are the same; free Blackjack Switch is played with six or eight decks of cards, Blackjack pays 1:1 and the dealer hits on soft 17.

The player uses the chips to place two equal bets and then uses the buttons hit, stand, double and switch to play his hands.