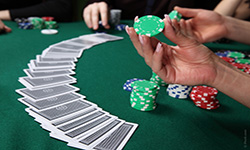 Comparing card games like Blackjack is when the player is competing against the dealer and not against other players.

Blackjack is only one of many popular casino card games. Other popular card games include baccarat and poker variations. Below you will find a list of card games that besides Blackjack are considered to be the most popular ones. Some of these games are very similar to Blackjack when it comes to the rules and the competition between just the player and dealer.

Baccarat is similar to blackjack only in that players sit around the table with a dealer. In baccarat, there are two players – the player and the dealer that are competing against one another. Three popular versions of the game exist, those being Punto Banco (or North American baccarat), Baccarat Chemin de Fer (or chemmy) and Baccarat Banque (or à deux tableaux). Punto Banco is generally the version that is labelled simply as Baccarat.

In the game, players may bet on who will win. Unlike blackjack, cards are dealt automatically in baccarat. The players cannot decide to “hit” or “stand”. Everything happens automatically based on the cards that are dealt. As a result, baccarat is a game whose outcome is based purely on luck. The game is dealt from a shoe containing four, six or eight decks of cards shuffled together. For each round, two cards are dealt face up to each hand, starting with the player. If either player has a total of eight or nine, the round is finished. Player win, dealer win or tie. If neither player has eight or nine, the drawing rules are applied. These determine whether the player gets a third card and then if the banker does.

The drawing rules state that if a player has an initial total of zero to five, he takes a third card. If he has six or seven, he stands. The same rules apply to the banker if the player stands. If the player takes a third card, the dealer acts according to more complex rules. These rules are simplified by a standard maths formula. Take the value of the player’s third card, counting right and nine as -2 and -1. Divide it by two, rounding down towards zero. Add three to the result. If the banker’s total is the final value or less, then draw. Otherwise, stand.

Blackjack, on the other hand takes skill, and the more knowledge a player has of basic strategy the more he can reduce the house edge and increase his chances of winning.

Poker games are more similar to blackjack, in that they require knowledge of strategy. In games like Texas Hold’em and Omaha poker, players compete against one another, rather than against a dealer, in an attempt to obtain the best poker hand. Poker tournaments, just like blackjack tournaments, are also popular in the online as well as offline setting.

Texas Hold’em is one of the variations of the standard poker game. Two cards, known as hole cards, are dealt face down to each player, followed by five community cards, which are placed face-up by the dealer. These are constructed in a series of three (the flop), an additional single card (the turn/fourth street) and a further single card (the river/fifth street). Players have the option to check, bet, raise or fold after each deal, and the strongest five card poker hand is created by taking cards from either the community or a player’s hole cards.

Having similar gameplay as Texas Hold’em, Omaha Hold’em differs slightly in the fact that each player is dealt four cards, and must make his best hand using exactly two of these, plus three of the five community cards dealt.

Variations of this variation are also able to played, such as Omaha hi-low split-8 or better, where each player makes a separate five-card high hand and five-card ace-to-five low hand, and the pot is then split between the high and low. However, this variation does contain a much more rule-intense method of gameplay.

Pontoon holds stronger ties to blackjack, in the sense that players need to make a total of 21 with the cards dealt to them. This, of course, is exactly the same as blackjack, although Pontoon is easily distinguished by the use of its game-specific terms, those being ‘twist’, ‘stick’ and ‘buy’, relating to ‘hit’, ‘stand’ and ‘double’, respectively.

Exceeding the 21 total in Pontoon will see the player go ‘bust’, and will therefore lose the hand. Like in blackjack, a 21 consisting of an Ace and a 10 card is a pontoon, and payouts are higher. Pontoon is played with six or eight Spanish decks of cards, though. These are regular 52-card decks, minus the ten-spot cards.

This game is played with a standard 52-card deck, plus a single joker. Six players and a dealer take part, with each player trying to defeat the banker.

The world of casino card gaming can be incredibly exciting, whether you are playing blackjack, baccarat, poker or other games. Try them all and find out which one you like best. Because some games are very similar in nature, you often find players that cross over from one game to another.