• You are here » Home » Chinese Blackjack 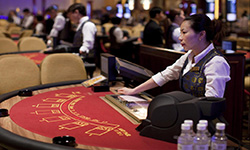 Chinese Blackjack, which is also known as 21-point, ban-luck or ban-nag, does bear similarity to the conventional version of Blackjack, and when the Chinese New Year rolls around, many gamblers will play some form of gambling as it is believed that the New Year brings in new, fresh luck.

The games uses one or two 52-card decks and is playable by any number of players. One is sometimes nominated to be the dealer, or they may take it in turns to hold the position. As with all blackjack variations, Chinese Blackjack is host to its own rules.

Chinese Blackjack Rules and How to Play

While many of the Chinese Blackjack rules are the same as those adhered to in standard versions of blackjack, there are also differences which make this particular variation unique. Chinese Blackjack features its own winning combinations, those being ban-ban, ban-nag, free hand and 5-Dragon.

Everything else in Chinese Blackjack is played the same as a standard version of the game.

Obviously, the main difference between the two versions of Blackjack are the winning combinations included in the Chinese version. It’s important to note that the value of the Ace changes depending upon how many cards the player holds in Chinese Blackjack. If they hold two cards, an Ace is counted as 10 or 11. If they hold three cards, Aces can be counted as 1 or 10. With four or more cards, an Ace will only count as 1.

However, one further difference states that if the dealer holds a total of 16-20 from his initially dealt cards, he may reveal a certain number of player hands before deciding if he should hit or stand. If the dealer busts, all players are paid even money on their hands. If the dealer reaches a total of 21 without busting, the dealer wins.

The House Advantage in Chinese Blackjack

With such rules in the dealer’s favor, as noted above, this provides the house with a very obvious edge. This is why when people play the game at home, it’s more commonplace for them to take turns being the dealer. This massive edge is increased upon even further with the possibility of players having to give up twice or thrice as much as their original wager due to the 5-Dragon combination.

Chinese Blackjack is one version of the game that is very much considered a real gamble. While a decent amount of skill can be put to use, including basic blackjack strategies, there really isn't anything that can strongly guarantee that you'll win a round.

However, if you enjoy a challenge and act favorably in the direction of proper gambling, Chinese Blackjack is definitely a game you should try out.