• You are here » Home » Multiplayer Blackjack 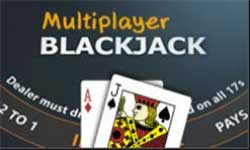 In most blackjack games the player is in competition against the dealer alone. Whether or not there are other players at the table is irrelevant. Each player is in his own game with the dealer. However, multiplayer blackjack adds a new element to the game as players are competing against each other as well.

Players in a game of multiplayer blackjack don’t compete against each other in the same sense as they compete against the dealer. Rather, players are still playing their own independent games. However, the player that wins the most hands and increases their bankroll by the largest amount is the winner.

Multiplayer blackjack can be found at table games as well as in blackjack tournaments. Generally, players start out with the same amount of money in their available bankroll and at the end of a predetermined number of rounds the player that has the most money is declared the winner.

On the Web you will find a variety of multiplayer blackjack games. There are different blackjack variations used in different competitions, so choose the variation that you are best at. You can also choose to play multiplayer games for free, just for the thrill of the competition, or for real money. Make real money deposits using credit, e-wallet or bank transfer.