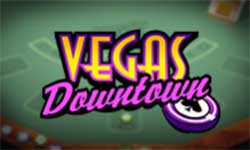 Vegas Downtown is a low-risk blackjack variant with a house edge of just 0.39%.

As many people will know, there are several variations of the blackjack game available to play, and this particular version gained its named as it is somewhat based around the land-based game that can be found in the Downtown area of Las Vegas.

Vegas Downtown Blackjack can now be found on numerous different online gaming platforms, and since its appearance has become one of the more preferred versions as it has one of the lowest house edges and exceptionally liberal rules when it comes to playing the game.

Obviously, being a a blackjack game, a lot of the rules surrounding playing Vegas Downtown are similar to the classic version of it. However, what rules make this particular variant different?

Because the game is only played with two decks, many card counters prefer this over other versions of blackjack, thanks to the simplicity it brings. The fact that players also get to double down on any initially dealt hands and after splitting is also an added boon.

Vegas Downtown is not to be confused with the similarly named Vegas Strip Blackjack. There are a couple of differences between the two variations. For a start, Vegas Strip Blackjack is played with four decks of cards as opposed to two, while the dealer must stand on soft 17 only in this game. Rules surrounding doubling down and re-splitting are exactly the same, as is the fact that the dealer can peek at his cards to see if he has blackjack should he be dealt a face up Ace.

Players may also only play one bet position in Vegas Strip Blackjack as well. So, while the only two rule differences are those relating to decks played with and dealer standings, these subtle differences are enough to make a difference. For a start, it means that the game is that bit harder for card counters when it comes to Vegas Strip, thanks to there being four decks.

As games of blackjack go, Vegas Downtown is one of the easier versions to play. As mentioned, if you're into the strategy of card counting, it provides somewhat of a haven to do so, considering it is played with only two decks.

A blackjack hand will pay 3 to 2 in Vegas Downtown, and a winning insurance bet pays 2 to 1. And with a house edge of just 0.39%, this version of blackjack is perfect for those who aren't interested in huge amounts of risk.