• You are here » Home » Counting Cards in Blackjack 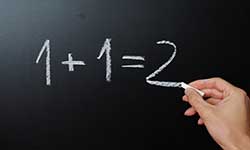 Counting your cards while playing Blackjack is NOT illegal. Although the casino has the right to ask you to leave if you get caught.

Counting cards is one of the most infamous blackjack strategies. Contrary to popular belief, counting cards does not require memorizing every card that has been dealt in a game of blackjack. Rather, card counters simply keep track of the ratio of high cards to low cards that are in the deck and place their bets accordingly.

There are varied methods and strategies of counting cards, all of which have been employed by players to determine which favors them most. The simplest card counting systems employ easy math, and the systems assign the number -1 to aces, face cards and 10s, +1 to low cards and 0 to medium value cards. As these cards are dealt, the player keeps track in his head.

Keeping a track of the numbers of cards that have been dealt is what is commercially known as the running count. Every time a card is laid down, you either add the assigned value or subtract it from the running total. If the assigned number is 0, then of course, nothing changes. As this amount changes, most players will wager higher amounts when the card count is higher than +3 and lower amounts when it falls below this value. This is due to the fact that the higher the number, the more 10s, face cards and aces there will be in the deck, and the more opportunity to create a blackjack.

The true count is used when there are multiple decks in play. Multiple decks were introduced to blackjack to discourage card counters from utilizing such methods, but if you’re aware of the number of decks of cards you’re playing with, the true count is easy to figure out. Simply take the running count and divide it by the number of decks. So, if you have a running count of +6 and you’re playing with two decks, six divided by two equates to three, and this is your true count. Therefore, in this particular example, the advantage lies with the player.

>>Go here to learn more about the difference between a Running & True counting system.

As mentioned, as the number of the card values dealt gets higher, the player knows there are more high cards in the deck; as the number gets lower the player knows there are more low cards in the deck. The strategy and stakes are adjusted accordingly. Some players like to keep a side count of Aces as well. Simple card counting systems for beginners include the Hi-Lo strategy, the Red Seven count and Knock-Out Blackjack, also known as the KO system.

The Hi-Lo strategy is employed by first of all assigning values to each of the cards in the following way; deuces to sixes +1, sevens to nines 0, 10s to aces -1. Then, start with a running count of zero at the start of the deck. As cards are revealed, add and subtract the assigned card values as described from the running count. For example, if the cards dealt were a 6, a 2, a 9, a Jack and a 4, the running count would be +1, +1, 0, -1, +1, equating to a running count of 2. Divide the running count by the number of decks you’re playing with to figure out your true count. Playing with two decks would mean you’d divide two by two, to receive 1 as your true count. Using this, you can then more strategically place wagers for further rounds.

>>Go here to learn more about the Hi-Lo counting system.

The Red 7 Count, on the other hand, assigns values of +1 to deuces through to sevens, but only to red-suited sevens. Black-suited sevens, along with eights and nines are valued at 0, while everything else above that is -1. Red 7 uses an alternate pivot point to other methods, which is the time when you need to increase your bets to take advantage of a favorable deck. Usually, this would be at +3, +4 or +5, but the count in Red 7 does not begin at zero. The count is figured out by multiplying the number of decks in play by -2. So, in a six deck game, your starting count would be 6 x -2, equating to -12. The pivot is reached in red 7 when you cross over into positive territory. This is what makes Red 7 a more favorable strategy.

Once you become a more experienced card counter you can move on to more advanced systems that allow for a more accurate count. These include Wong Halves, KISS and the Omega II card counting system.

Wong Halves is considered one of the most advanced card counting systems of all. In fact, there are few people who actually use this strategy due to its complexity. Values assigned to cards are as follows; 10s to aces are -1, nines are worth -0.5, deuces and sevens are worth +0.5, threes, fours and sixes are worth +1 and fives are worth +1.5. In comparison to the other strategies, Wong Halves is a whole load of values more to remember. It is, however, a lot more accurate when providing the true count, and therefore, placing higher bets when the cards are in your favor provides a stronger opportunity for profit.

Omega II offers up a range of value from +1 (given to deuces, threes and sevens), to +2 (fours through to sixes), 0 (for eights and aces) -1 (for nines) and -2 (for 10s to Kings). Like the Wong Halves method, Omega II is a lot more accurate in determining how many cards are left in the decks that will go in your favor. However, because of the vast amount of values, counting is a little more difficult. Furthermore, this method also requires a separate ace count to be tallied. If for example, you’re playing with eight decks and using the Omega II method, this means there are 32 aces available altogether. When you know the deck is rich in aces, you can combine that knowledge with a high positive count to generate outstanding results.

It is important to note that while card counting is not illegal it is frowned upon by casinos. This may seem like nonsense to read when playing online casino blackjack games, but live casinos do reserve the right to ask you to leave the table if you are suspected of counting cards. Therefore, mastering the techniques of card counting, regardless of which method you opt to use, is something all card counters should strive towards.