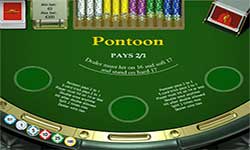 Pontoon was designed mainly to be played in British and Australian casinos, but also in casinos across Singapore and Malaysia. It is considered as a variant of Spanish 21 mainly played in America, and generally as a variant of blackjack, although it is a separate and unique game in itself. However, with the appearance of online casinos, players from all around the world began playing Pontoon.

The cards are valued the same as in blackjack. Aces are valued 1 or 11, cards from 2 to 10 are valued as such, while face cards are valued 10, and those are jack, queen and king. The aim is simple, you have to collect the appropriate value to form a hand that is closest as possible to 21. Also, you shouldn’t exceed this value or you will lose.

In Pontoon players have to decide who is going to be the banker. This can be decided simply by each player cutting the deck and the one with the highest card can become the banker. Online Pontoon is different in this respect.

Each player is dealt a face down card and has to place his bet without peeking the card value. After that a second card is dealt and the players can take a look at their hand. The best possible hand that you can have is 21, but it has to be made up of two cards, one ten card and an ace. It is called Pontoon. If the banker has a Pontoon he immediately shows it and wins double the amount of the player’s bets.

The second best hand is a hand consisting of five cards that have a total of 21 or smaller. This is called a Five Card Trick. A Pontoon or a Five Card Hand can beat any three or four card hands that have the same total of 21 or smaller. A Five Card Hand can have a smaller total, but a Pontoon is strictly 21. Keep in mind that if you and the banker have hands of equal values, the banker always wins.

How Pontoon is Different to Blackjack

Splitting two cards of equal value is the same as in blackjack. However, in Pontoon doubling is replaced with buying. Just like in blackjack, when you double your bet amount and wait for an additional card, only in Pontoon the round doesn’t stop for you when you have bought your additional card and you can continue playing. Also:

Optionally you can look for a reputable casino that offers a separate bonus for playing table games, because in general welcome bonuses are given only for playing slots, so look for the casinos with additional table game bonuses.