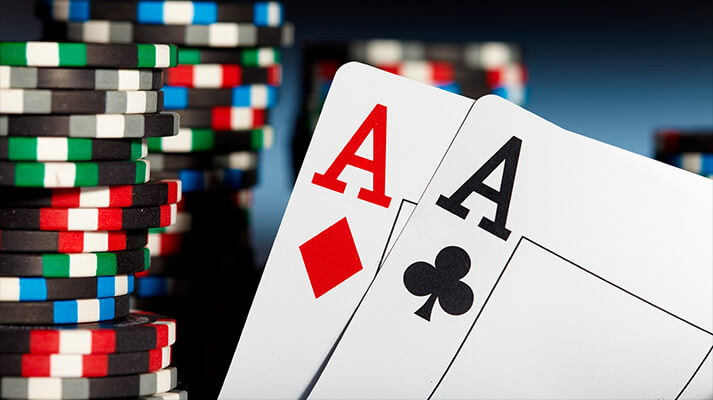 According to the basic Blackjack strategy, splitting Aces and 8s is a must. In this article, we will help you to understand the logic behind this golden rule in Blackjack and explain how it works in practice. There is an exception to every rule, though, so let’s find out if it applies to 8s and Aces splitting. Stay with us to learn more Blackjack tips and tricks that can help you be more successful whether you play RNG or live dealer Blackjack.

A split is an option you can go for when you have a pair of cards. To play it, you need to place another bet of the same value as your Ante. However, not all cards are worth it. A hand that is definitely worth an extra wager is the one containing two Aces. To put it simply, two Aces make a soft 12. If you continue playing and hit, you can easily bust as almost one-third of the cards are worth 10. That’s when you can benefit from splitting.

When you split a pair of Aces, you will have two hands worth 11 points each. Yet, in such a situation, a card worth 10 can turn you into a winner as it can complete a hand totalling 21. Since you have placed another Ante practically, splitting Aces will give you two hands that can beat the dealer’s hand.

Two Aces in a hand make a hard 16. With such a hand, there are not many options as both hitting and standing can result in a bust. Now, if you split such a hand, your chances of winning with one of the new two hands are considerably higher. Again, with one-third of the cards being worth 10, you have an opportunity to create a hand of 18, which can beat the dealer’s hand.

If you play Blackjack online, you should always split 8s and Aces. However, if you play the game at a brick-and-mortar casino and you know how to count cards, then you can deviate from the optimal strategy. There is one situation in which you can hit on a pair of Aces instead of splitting them. It is when your card count is negative, and the dealer’s up-card is an 8, 9 or 10.

If you know how to count cards, you know that when the count is negative, there are only a few of 10s left in the shoe. That means that your chances of getting a hand of 21 are lower and the same applies to the dealer.

Splitting any two cards involves risking more money. Still, in some situations, it can help you beat the dealer or break even. As you can see, splitting 8s and Aces in online Blackjack is mandatory because card counting is not an option due to low deck penetration. So, whether you play Blackjack at virtual or live tables at online casinos, don’t doubt your decision to split two 8s or Aces.

However, what you should also keep in mind is that each Blackjack variant has its own rules regarding splitting. For instance, you can get only one card per hand when you split Aces. Also, you may not be able to resplit Aces if the additional card you have received is an Ace. In most cases, doubling down is not allowed after splitting either.

Click here to visit some of the best online Blackjack casinos and apply the basic strategy to make the most of playing the game!